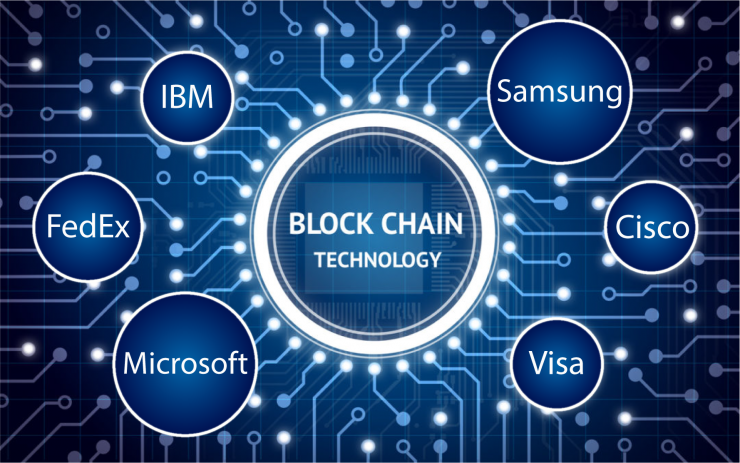 6 Corporations that are already implementing Blockchain that you need to know about !

Distributed Ledger Technology  is widely known as one of the outstanding technologies of the fourth industrial revolution.  Tech giants are already implementing blockchain technologies and trying to monopolize it by filing many patents on it.

This innovation has brought with it a new class of developers, with innovative ideas to use blockchain to upgrade their businesses. On the other hand Tech corporations are already in it and already contributing in many ways, that will have a huge impact on future development of ecosystem.

Microsoft considers that blockchain technology will help businesses  increase profits and efficiency, reduce costs and risks. The company has analyzed capabilities of the distributed ledger technology and has intentions to implement blockchain in its future products. At the moment Corporation has over 40  blockchain patents filed.

In 2005 Microsoft Corporation was one of the first software vendors to offer Ethereum Blockchain as a Service (BaaS) on its Azure cloud. At present Azure supports distributed ledgers like Hyperledger Fabric, R3 Corda. Ethereum and BlockApps.

Offering Blockchain as a Service will allow customers to pilot technology without colossal expenditures connected with onsite development and hardware.

FedEx senior vice president of IT Kevin Humphries announced that blockchain platform will give customers opportunity to track their packages. Besides, customers would be able track packages not only while they are in FedEx control also after and before it.

Furthermore FedEx continuing work on implementation blockchain in its other operations.

Presently IBM has 27 patents filed. Several of the patents are connected to the launching of blockchain enterprise systems.

International credit titan Visa has started the first pilot phase of its B2B payment service based on blockchain. This platform is designed to deliver businesses and financial institutions a quick and secure way to B2B payments. It will cut out intermediaries and reduce costs.

Presently visa is cooperating with various banks great large financial institutions to test its services. Several banks began using this technology for transactions. All test are planned to be done by the second half of 2018.

Furthermore, Visa’s partners could utilize its API for launching their own platforms.

An American multinational technology conglomerate is launching a new way of private group  communication based on Blockchain.

New method of communication was described in patent application. In the application Insurance describe how Blockchain technology can provide more secure group conversation, file sharing and track conversation story. The company asserted that Blockchain has ability to:

South Korean  multinational electronics company has announced its intentions of using Blockchain technology for its international supply chain. It is already creating a system based in distributed ledger technology that will allow to track worldwide shipments. Furthermore,  Company calculated that it will reduce shipping costs by 20%.

The blockchain chief at Samsung, Song Kwang announced that blockchain will have huge impact on supply chain. It seems that Samsung international supply based on Blockchain will bring  air cargo and shipping containers volumes to 480,000 tons.